Our “Gems of Pontiac” day started at the private, never-open-to-the-public, collection of Larry Smith, founder and former owner of Autometric Collision.  Although Larry’s collection is split between here and Scottsdale, we were able to see what a real collector, driving enthusiast, automotive historian, and skilled mechanic, body man, and painter, can accomplish.  Larry’s cars were, in his words, simply “Cars that I like!”  He showed us his 1935 Hoffman, with a water-cooled X-8 engine.  There is only 1 made, and little is known about it.  Looking for some speed (aren’t we always?) then some Corvette’s, Porsche’s, and Shelby’s were in ample supply! And then the spectacular 1936 Stout Scarab, shown last year (and winning) at the Monaco Concours d’Elegance.  His interest remains varied, as he told us that his first car to collect was a Triumph TR3 (also in the collection).

We then took a short drive to the PMD Garage, where Gordon Heidacker, a former Chrysler executive with ties to Team Viper, told us about their Viper capabilities!  They had 50 Viper engine blocks inside, and are in the process of acquiring all of the existing Viper parts stock from Chrysler, for a full-service one stop shop for all Viper owners, for both stock originality and performance engine build!

Our last stop was at LBI Limited, a national sales organization of fine collector and sports cars, and where else could one go to find 4 Vipers for sale…but not average ones, low mileage, a GTS, and at the top of the heap, the Team Oreca Viper that won the 24 Hours of Le Mans!  Don’t we hope that one stays in the Detroit area!  A fun day for MCVO members with a turnout of 26 car enthusiasts and 16 Vipers.

We want to give a quick shoutout to our pop quiz winner, Tony Smith.

Editor’s note: We want to thank Jon Block for taking the time to create this truly unique event, and authoring this abbreviated article. The full article will be published in our next upcoming Newsletter, along with photos from Jon and Bruce Heckman.  We also want to thank Jason Pontello for taking the time to photograph the event and send them to the club.  Jason’s photos are highlighted here. 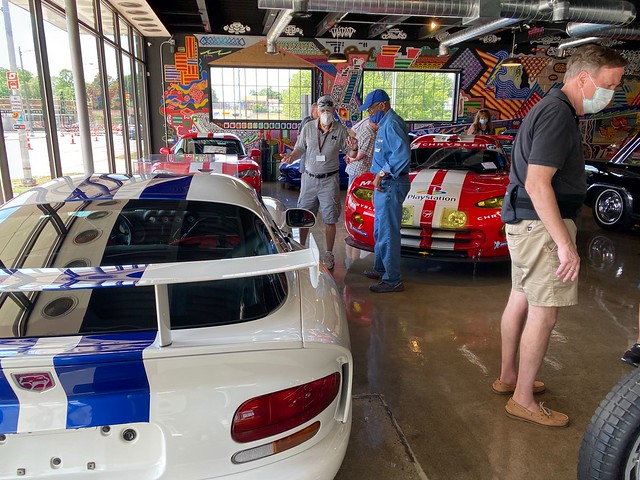